Bitcoin has officially become one of the fastest rising assets in the world, surpassing the $10,000 mark for the first time in its nascent history.

At the time of publishing, one bitcoin trades at almost $10,700. The price went up to its highest ever peak of $10,832 just a few hours earlier. 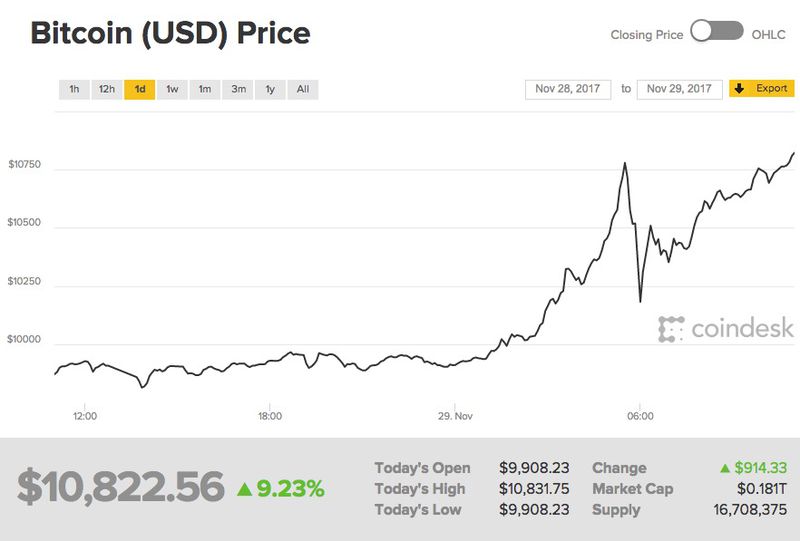 These levels mark a 57% increase compared to Bitcoin’s price a month ago of $6,140. The cryptocurrency’s price has come a long way since last year’s levels of around $740.

To think that only seven years ago, one could buy a Bitcoin for only 6 cents.

The new price levels boosted the currency’s market capitalization to $178 billion or as some put it, almost 18% of a whopping trillion dollars.

Amidst an expected Bitcoin split, the price had been going up steadily in the past months. A planned split, the SegWit2x, scheduled for around mid-November, was attributed to the rise of the coin in the past weeks. The split, or the so called “hard fork”, was canceled in the first week of November.

To the extend, the two are correlated, Bitcoin’s price did mark a slight withdrawal after the news of the cancelation, going down to 5,857.

Only to make a spectacular comeback.

Calling off the hard fork helped clear a doze of uncertainty amongst market participants. The price bounced back quickly, jumping by as much as $1,000 overnight in the days following the cancelation.

The recent increases indicate the trust in Bitcoin across the crypto community, the hunger for a disruptive and transparent type of investment assets and, as some have remarked, the need for new financial world order.

The rise could be further attributed to wider adoption on part of financial institutions and the Wall Street community. At the end of October, US derivatives exchange CME Group announced plans to launch Bitcoin futures by the end of 2017, pending regulatory approvals.

On the background of these bullish developments, Bitcoin continues to be shrouded in controversy. While supporters are anticipating new highs, many analysts voice continuous warnings about a possible bubble stating that the cryptocurrency lacks any underlying fundamentals to sustain such high levels.

On the flip side, investors like James Altucher and John McAfee predicted that Bitcoin price could reach $1 million by 2020.

“There will be no fiat in five years. 5 years after the invention of the automobile, 90% of buggy whip manufacturers had closed shop. This new paradigm has to work faster than that”, he tweeted shortly after his prediction of Bitcoin at $1 million.